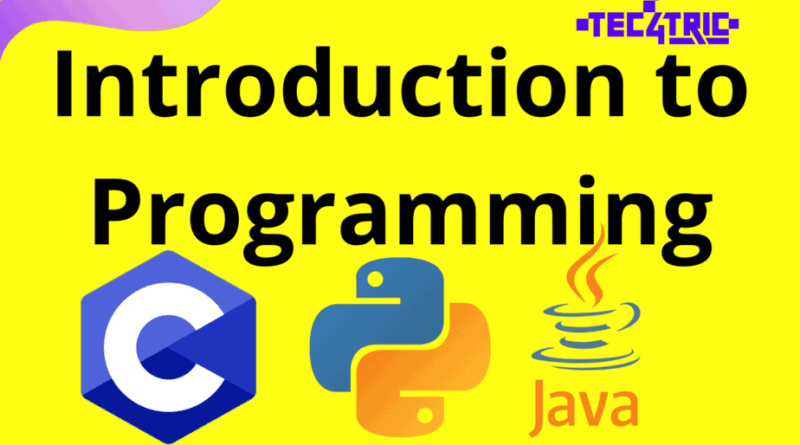 When we hear the word “Programming”, we might think that it is too much hard to learn. But, the real thing is, it is not difficult to learn and, anyone can learn it. Programming does not mean, sitting in front of computers and coding all day. It is all about the plan of attack to solve a problem. So, don’t worry, we at the Tec4Tric team are providing FREE high-quality courses on YouTube as well as on this website. Let’s get started!

Programming is basically a set of instructions given to the computers to perform a variety of tasks.

Let me give you an example of building a house. You want to build a house and you hired a builder to build your house. You’ve arranged all the things but you forget to hire an architect. So, you are going to build the house without proper design. Will it work or not? So, first, you have to think about the design, and then only after all the tasks, builders can start building your house. I want to say that, It is a step-by-step process. Programming is also the same, it is also a step-by-step process, and that’s called Algorithm. But, what is an Algorithm? jump to the algorithm parts.

Why do we need Programming?

Programming is everywhere. In this digital world, whatever you see, they are bind with some programming and algorithms. From your washing machine to your smartphone, each and every device uses programming. But what is the need?

You are reading this and understanding the concept, which means you know the English language and you can interpret it. But, computers do not understand any languages like English, Hindi or Bengali, etc. It can only understand numbers, and that too is in Binary. Binary means two, 1, and 0. 1 represent On state, and 0 represents Off state. This is how the computer works, it only deals with binary digits. But, the real problem is, we can’t talk with binary digits, like, if I say, what is “1001101”? What will be your first impressions? This is nothing but “77” in binary form. This is called Machine Language(0 & 1), which is a Low-Level Language, and the Computer can’t understand human languages, which is a High-Level Language. We’ll talk about these languages in the next post. So, to write some programs we need programming language(s).

What is Programming Language?

As you noticed, it is not possible for humans to code in Machine Language, so we have High-Level Languages like C, Java, Python, etc. All these programming languages offer us to code in the human-readable language, which is English. And then, it converts it to machine language, we don’t need to bother about that. You may choose any programming language to solve a particular problem. The best thing is the algorithm will remain the same for all the programming languages. I prefer Linux Operating Systems to run codes. So, if you don’t know about Linux, learn it here for free.

What is an Algorithm?

An algorithm is nothing but a step-by-step guide to solving a particular problem. It is machine-independent. Suppose, I want to make a cup of tea, then what will be the process?

One particular problem may have many solutions, and this is very common in programming.

Which Programming Language to Choose as a Beginner?

Why to starts with C?

You can develop great programming skills using C. First, you learn C and then move to other languages as you need.

What we are going to do?

We are making C tutorials in Bengali and English languages. And this is absolutely free. So, please support the channel by sharing the content and subscribing. We are also creating valuable blogs regarding programming in C. So, keep updated with the blog by subscribing to our newsletter.

See you in the next Blog!

I just want to say that, you can be a good programmer if you follow the above steps. Always make a plan or algorithm before coding the solution. It will save a lot of time. If you are new to programming, then it will be best if you start with C.

We're updating the contents, please refresh the page after some time to get the latest updates.